Abigail Hunt is a visual artist who’s varied working practice includes making objects, sculptures, collage and performance. She is interested in the definitions of objects and considering the point at which something becomes another thing that it previously was not. She looks to use found objects and images throughout her visual ideas.

She works independently as well as in collaboration with artist Kieren Reed and together they make work which considers a direct relationship with its audience.

As a direct part of her practice, Abigail works on many learning projects in museums and galleries, including Tate, Whitechapel, Gasworks and Camden Arts Centre. 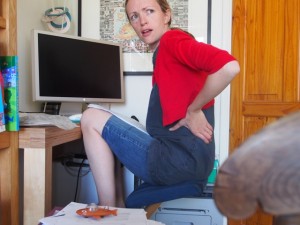 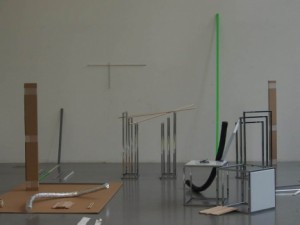 My family, found objects, playing with lego, polar bears, walking, reading, Springtime, eating crisps and watching trailers to films I never get time to go and see – usually that’s enough to guess what’s going to happen so I don’t worry so much about not seeing the whole film.

Being in confined spaces, being told I can’t do something (which usually makes me much more determined to do it) and being cold. And not getting enough sleep.

Being in charge of your own time and space and the general look on peoples faces when you tell them what you do for a living.

I am not sure I could name just one artwork, as I am more fickle in what I like looking at than that. I guess our walls at home are completely filled with lots and lots of artworks, including my own, my husbands, drawings by my little boy and artworks we have been given by friends, things from projects we have been involved in or some things we have chosen to buy. I like this eclectic mix of things with memories, things I just like visually or things that make me think and I like being surrounded by all this visual stuff, which we also change and move around (we have lots of things tucked away in drawers that we don’t have wall space for). I don’t think I could pick just one thing. And that’s not even mentioning the images of artworks and other things that I find in books and magazines that I like and that I want to surround myself with too…

There is nothing like being able to say you are doing something you love as your career. I feel very lucky. Choosing to become an artist can feel like a risky career path and lots of people talk about more stability, but actually being freelance and in control of your own path can actually be more stable, as you can shift things as you need to and if you need to work differently to follow an idea or a project, you have the freedom to do so.

Years after leaving school I bumped into an old class mate who asked me what I was doing with my life and I said I was a practicing artist. His face was actually genuinely surprised and even a little jealous as he said to me, ‘wow – you are the only person I know who is actually living the life they always wanted’. That seems like a pretty good conclusion to me!