Born and raised in London, Mark spent several years after graduating as an art teacher in secondary schools. 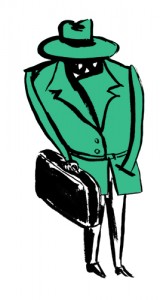 In 2008 Mark decided to pursue a career as an illustrator. He still teaches freelance occasionally, delivering specialist arts education to schools and museums. His illustrations can be seen most often in various newspapers and magazines, including a regular column in the Independent on Sunday.

Mark likes to draw animals and people, play football and paint murals. Most often Mark uses brush and ink or lino/woodcuts. There is a light-hearted sense of humour running throughout his illustrations, which have a strong graphic quality.

Not doing all the other rubbish things.